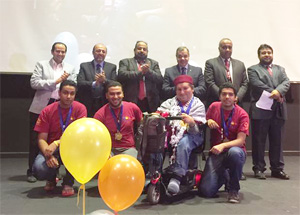 Two teams from Faculty of Engineering (at Shoubra) were qualified for participation in the ACM Arab Collegiate Programming Contest in Sharm-ElShiekh on Sunday, 13-11-2016. One of the two teams (out of 111 teams from different Arab universities) is qualified for participation in the 41st ACM International Collegiate Programming Contest (and competing with 128 teams from top universities around the world) in May 2017 in «Rapid City», U.S.A.
The ICPC traces its roots to a competition held at Texas A&M University in 1970 hosted by the Alpha Chapter of the Upsilon Pi Epsilon Computer Science Honor Society (UPE). This initial programming competition was titled First Annual Texas Collegiate Programming Championship and each University was represented by a team of up to 5 members.
The contest evolved into its present form as a multi-tier competition in 1977, with the first finals held in conjunction with the ACM Computer Science Conference. From 1977 to 1989, the contest included mainly teams of four from universities throughout the United States and Canada. Headquartered at Baylor University since 1989, with regionals established within the world's university community, operating under the auspices of ACM, and with substantial industry support, the ICPC has grown into a worldwide competition. To increase access to the World Finals, teams were reduced to 3 students within their first five academic years.
Since the beginning of IBM's sponsorship in 1997, contest participation has grown by 1600%. In 1997, 840 teams from 560 universities participated. In 2015, 40,266 students from 2,736 universities in 102 countries on six continents participated in regional competitions. As a highly localized extra-curricular university mind sport, operating as a globally-coordinated unregistered association under auspicing and hosting agreements with ACM, host universities and non-profits, the ICPC is open to qualified teams from every university in the world.
The ACM-ICPC World Finals (The Annual World Finals of the ACM International Collegiate Programming Contest World Finals) is the final round of competition. Over its history it has become a 4-day event held in the finest venues worldwide with 128 teams competing in the 2016 World Finals. UPE recognizes all of the regional champions at the event. Recent World Champion teams have been recognized by their country's head of state and at the annual ACM Awards Ceremony. Past ICPC alumni populate much of the high tech information technology industry worldwide.
More about the contest in this link
https://en.wikipedia.org/wiki/ACM_International_Collegiate_Programming_Contest